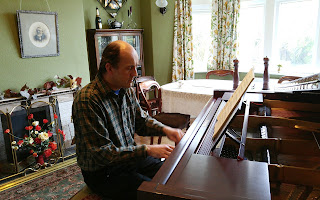 " ...Alston town has about a thousand people – and we’re really quite isolated ... we’re going to have to learn to do things for ourselves, possibly as people did a hundred years ago ... "

“I started having lessons when I was five or six; playing piano has always been an important part of my life. It’s one of the ways in which I communicate with God. That stilling process of playing opens up channels, so it’s an important part of my spiritual life. Occasionally I accompany services, but if I’m dashing from my stall to the piano and back again, from my point of view it makes for a less satisfactory worship experience. Fortunately we do have very good musicians who can play most of the time, so mainly I play just for my own personal pleasure and satisfaction.

A while ago circumstances meant that I got out of the habit of playing. The Church kindly thought that playing the piano was part of my personal development so they paid for half a dozen lessons to help me start up again. I began by learning some Beethoven sonatas. I’m now also trying to get my fingers around Oscar Peterson - trying to play some of his transcriptions is fun!

If I had to pick one composer it would be JS Bach - we tend to refer to him as God in this house. There’s a serenity about his music, and a rightness which is immensely good. It’s not easy to put into words; Bach himself was close to God, there’s something about his music which seems to bridge that gap somehow. A friend of mine has a good phrase; “music is God’s language here on Earth”, and I think there’s something in that, because it touches us at a level where words often don’t. Music often opens things up that perhaps other things don’t. Bach is the composer who most resonates with who I am, he’s been in my life for as long as I can remember.

Playing the piano is a process of praying, I think. Prayer is wide-ranging, it’s not just saying words in church or consciously focussing on God, it can be about the whole of life - and music is part of that communication with God and with the wider world.

I have a project that is focussed on the town of Alston and also on the wider community, scattered across an area of a couple of hundred square kilometres. Alston town has about a thousand people – and we’re really quite isolated; we’re up in the North Pennines in an area that gets snowed in regularly. It’s around 40 minutes’ drive to the next place of any size so we have to be self-sufficient. We’re inconvenient to the authorities and providing services is never going to be profitable. So we’re beginning to lose our services; the banks have closed, the hospital is under threat, the buses are minimal, the school is under threat … Like a lot of people, I’ve realised that if we are to flourish in the long term, we’re going to have to learn to do things for ourselves, possibly as people did fifty, sixty or a hundred years ago.

The Church has generously given me a three month sabbatical so that I can explore how we might make that happen. It’s not exactly a Church ‘thing’, but my view is that God is interested in the whole of our lives and community and how we flourish as a whole, and so the Church ought to be a part of that anyway. If we’re looking at the future of the community in general, it’s become increasingly apparent to me that there’s no point in doing this unless we’re looking at sustainability and also at carbon neutral, and then moving ahead quite quickly in that direction. And perhaps we can be an exemplar of how this can be done.

So I’m researching what people are already doing in different parts of the country and beyond, attending courses, reading, interviewing, visiting colleagues and learning ways of getting the community involved in local development. Hopefully by the end I’ll have the beginning of a paper suggesting a way forward which the wider community can pick up and work with as they develop a community and neighbourhood plan, and then we will start to have conversations much more widely with the community about as to where we want to go. It’s daunting but exciting!” (The Revd Mark Nash-Williams was speaking with Markson Pianos Composer in Residence Lola Perrin)
Posted by The View From Markson Pianos at 02:16