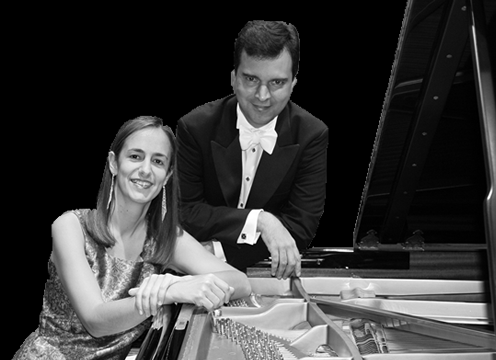 Márcio We try to have a mix of standard and contemporary repertoire in all our programmes. We find connections between the new pieces and the older pieces in the programme. For instance, we may work with a new composer who loves Schubert, so we pair his works with Schubert and somehow that works very well. Or we may work with a composer who uses pentatonic scales so we pair her music with Debussy and that also works so well.

Estibaliz Generally around 30% of our repertoire is new music. We find that when given the chance, audiences like listening to new music, people are often surprised that they like new music so much, sometimes more than the older pieces they may already know.

Márcio  I was raised in Brazil, in Santos - a city that had no music except an annual new music festival. The festival is now fifty years old, and at that time it was run by Gilberto Mendes who programmed post-modern music. He was a very open person, a composer who also worked in a bank. The concerts were free and there were usually around seven people in the audience and I was one of them! New music was the only kind of music I'd hear and it always interested me.

In our duo we play around 20 new pieces of music on a regular basis. That doesn't count premières, it doesn't really matter to us whether we play a première or not. To us the performance is more important than “the premiere” so we don't really count the number or premières we've done; when we take up a work we tend to play it more than once.

Estibaliz I come from Bilbao. I met Márcio in a summer camp in Spain and then we met again by chance at the Hartt School in Connecticut. We mostly work together but sometimes one of us will play solo if the programme requires it. For example, in our minimalism programme I play a Philip Glass solo piano piece.

Márcio  We have our roles. Estibaliz always takes Primo …

Estibaliz … yes, he has Secondo, because it's he who has the pedal ...

Márcio  ... and it's easier for me to be quieter than her so I take the Secondo role!

Estibaliz   Márcio is more into the harmonics, and the chords and the theory, I'm more into the melody and how the music sounds, so it suits both of us to stick to those roles.

Our vision is that playing the music is more important than fame. We like to be in contact with composers, we're not really looking for a big international career, with managers, extensive travel, and so on. We love what we do and we're really happy we're in a situation where we play what we want where we want, it's good to be independent.

Estibaliz Once when we played, someone told me she couldn't sleep for a whole night, she was so stimulated after hearing the new music we'd played.

Short bio
Internationally acclaimed Duo Gastesi-Bezerra has delighted audiences for over a decade with exciting programs of traditional and contemporary music for piano ensemble. Billed by the American Record Guide, as “a strong combination, playing very well together — often indistinguishable,” pianists Estibaliz Gastesi and Márcio Bezerra are staunch supporters of new music. They have commissioned and premiered more than twenty works by renowned and upcoming composers.

Posted by The View From Markson Pianos at 06:17 No comments: