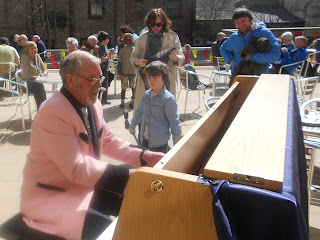 Tony Cornwall on the terrace

Our first festival took place this year in April and it was fantastic. Financially we did far better than we thought we would and everyone seemed to enjoy themselves. We were trying out a brand new venue in the town which was taking a pretty major risk, but it came off well in the end. We hired in three pianos including an upright on a frame that we could move around. When it was outside some incredible pianists performed on it ad hoc; it was so loud that it could be heard across the valley, across the town and up the hill. The tickets sales went through the roof after that!

I come from both a “posh” and “community” music background so I wanted to do things in this festival for everyone. We organised events for kids, for young families, had jazz, blues, world music, boogie-woogie in the bar and fantastic classical concerts in the two halls- pretty much wall-to-wall music from Friday night to Sunday night. Next year, in addition to the kind of events we programmed for the 2013 festival, we'll be having masterclasses given by some of our principal artists.

I was the Musical Director of the Hebden Bridge Arts Festival for sixteen years, and ran a Piano Weekend as part of that – a festival within a festival. When the Arts Festival truncated from a fortnight to a week it would have been impossible to carry on the Piano Weekend within it. So, we found the venue and sponsorship to branch out on our own.

We live in an amazing town where, including all the people on the hills, there's only around 8,000 of us living here. We have a blues festival, an acoustic music festival, a burlesque festival, the main arts festival – and there's many venues as well. This town is full of artists – just this weekend we had a studio show featuring 80 studios of working artists in town – that's an extraordinary number of studios! So there's a lot of active artists who are willing to come to our festival but also there's a can-do, we-can-make-this-happen attitude around this town, because we all know each other. There's a really good sense of community here.

Posted by The View From Markson Pianos at 05:46 No comments: