You think of the piano as an intellectual exercise, the dancing you think of as much more physical. But with both, I find I get much more mentally, rather than physically, tired ...


Katya I started piano when I was four years old and learnt for eight years, 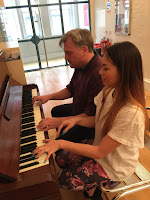 getting up to a high level and taking part in competitions. I didn’t continue because the dancing took over.  But I had the piano at home and kept it up because I love playing. I still play now, picking out by ear the music I like to listen to.

Ed I started piano in my forties. I’d always wanted to play and when my kids started learning I decided to start too. We were in Opposition and I had more flexibility over my time than I’d had when we were in Government. I realised that to improve, I had to make the time to practice, and also by doing Grades I would be forced to learn in a way that I’d progress.

Katya I’m a competitive dancer and practice is the number one thing, so it’s very similar to piano performance. Every day we do the same basic steps over and over, we do self-practice, we know what to work on.  We go to the dance studio and in front of the mirror keep going over and over the same steps to perfect them. We say it’s quality rather than quantity. It’s very physical and you get injuries. I also have private lessons and travel around the world to particular teachers as well as to dance in competitions.

Ed The learning of the piano really helped to give me the confidence that I could do Strictly. When you start, either on the piano or in the dance, you feel it’s impossible, nothing is intuitive. So you can’t rely on instinct because you’re a learner. But I’ve realised through the piano work that if you take the time, you can do it so that’s helped me in the dance. Also, I realised that both my dance and piano teachers were using the same technique which was rather than trying to do the whole thing at once, it was to stop when things go wrong and work out what was going through my head, start again and try to get to the next step. It’s that method of building repetition, of finding the bits and doing them again and again, that works in both piano and dance.


When I began piano I had to learn to read the left hand music - the bass clef – I’d only done treble clef in violin before. So that mental to physical, having to read in a new stave and play with my left hand …. similarly in dance when I started off I used to move everything at one time. But Katya said no, when I say move your knees, I don’t mean move your chin or your shoulders! And concentrating on isolating an element and then flowing from that, there’s a connection with the piano too. You think of the piano as an intellectual exercise, the dancing you think of as much more physical. But with both, I find I get much more mentally, rather than physically, tired, the taking-in of information and trying to remember everything at the same time, be it feet, posture, or be it notes, expressions and dynamics, thinking of those things at the same time – it’s very mentally tiring.

Katya When I dance I sing a lot, I connect to the song, I express the dynamics with my body. You don’t want to approach it carelessly; that expression of the notes with fingers in piano translates in dance to the expression of the music with your body. There's a total connection to the sound and it's  an amazing feeling when you become as one with the music.

Ed When we did the Quickstep, it was the first time that the music carried us along and we just rolled with it. I’ve also had that same experience at the piano. I have a 1966, Japanese, one female owner, upright Yamaha which I bought from Markson Pianos; affordable and it sounds fantastic. My only regret is I never make it sound as good as the piano tuner makes it sound! But at least I get glimpses of what that piano is really capable of.

Katya In dance, the equivalent to an excellent piano is the co-ordination of your body, it has to be natural yet rehearsed. That’s what so hard about dancing, you have to make something look natural when it’s actually unnatural.

Ed It’s also the discipline. I’m a complete amateur and we have to go from scratch up to performing on TV all within five days. If you’re a perfectionist like Katya -

Ed There’s a particular heel turn; when we were in Norwich early on and Katya said we’re not going to move on until you’ve done this five times. It took me thirty-eight goes before I’d achieved five of them!

Katya And after that we did three in a row!

Ed Amateur adult pianists learn differently to children and can do more of what they enjoy at the piano. But what I’ve learnt through the dance is the importance of discipline and practice at the piano, so it’s not just about what you actually enjoy doing or learning. And I’ve definitely learnt the discipline of repetition.

Katya It really helped that you’d been learning the piano because when we started Strictly it wasn’t necessary for me to teach you musicality or rhythm – it’s been a massive benefit.

******
Ed Balls and Mrs Katya Jones perform in Strictly Come Dancing in Blackpool on Saturday November 19th - wishing them all the best!

Posted by The View From Markson Pianos at 05:52 1 comment: