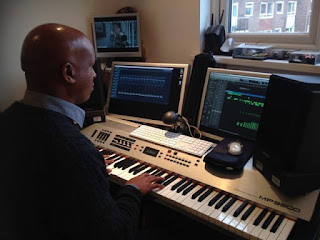 ... he filmed the very first moving images  ...  Before he was due to unveil his film camera he mysteriously disappeared. He’d got on a train at  Dijon and was never seen again ...


“30 years ago I was working as a mechanical engineering technician. I’d done a four-year apprenticeship straight out of school. Our company built power stations and also raised the Tudor ship Mary Rose. I’d go to recording studios in the evenings to work as a ‘tape op’; I really wanted to become a recording engineer. I decided to learn the piano, I hadn’t had any real music training and had no idea about scales, chords, and so on. I enrolled at Morley 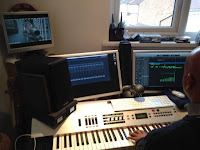 College and did every course you could imagine … big band, classical piano, harmony and counterpoint, jazz theory, jazz composition … and learnt how to read and write music notation and started playing gigs. It was hard work and tough financially, by then I was married with a young family, but I just dived in and really loved it; I was fulfilling my dream, my ambition. Eventually I did an MMus in Composing for Film and TV. It seemed like a very long journey!

I’ve been writing music for films for the last seventeen years. Recently I finished a TV documentary; The Modern British Slave Trade.  There are many more people in slavery now than back in the 17th and 18th centuries - and in everyday walks of life; people who do your nails, tarmac your drives, wash your cars …. this documentary shines a light on something we know little about and it’s very sad. 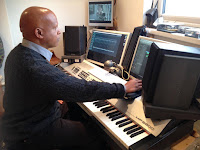 When I compose, I’ll watch the film a couple of times just to see how it makes me feel as a viewer, to see what moves me, and then I’ll go away, think about it and let ideas fester gradually – depending on the deadline. I will then return to the film, place my hands on the piano, and see what different ideas come to me.

Sometimes I’ll score the film chronologically, or maybe the hardest section first, other times I’ll write a theme which I think fits the character and then work the theme in various ways, changing keys, formats, time signatures, to build the picture.

Directors usually employ a ‘temp’ (temporary) track pasted to the film in order to specify a ‘musical direction’. I also encourage them to speak to me in terms of emotion rather than by quoting musical terms, because that really helps us to get straight to a solution that works for us both quickly. They may want me to bring out an emotion that’s not quite coming through in the film, perhaps something that’s not quite working with one of the actors or with a scene, or they might need to highlight some darkness or some happiness … and I solve these issues in different ways, via the tonalities I use, or the orchestration. I work intuitively, laying out the music in my software program against the picture. When there’s the budget to hire musicians, I score their parts. But when a piano is needed, I record myself.

In 2014 I wrote the soundtrack for The First Film, a documentary about Louis Le Prince, a Frenchman who, in 1888 filmed the very first moving images, not in glamorous New York or Paris but in Leeds! Before he was due to unveil his film camera invention and ’screen’ the moving image, he mysteriously disappeared. He’d got on a train at  Dijon and was never seen again, and then was forgotten by history. The producer director David Nicholas Wilkinson had wanted to tell this story for the last thirty-odd years. He asked me to do something along the lines of Philip Glass, so I went to my Bechstein upright and hashed out several ideas, settled on a few and took it from there. We worked on the project for around nine months; it was gratifying to have so much time and freedom. The footage was continuously added as new information was discovered, so I did several re-writes. Usually on a ‘locked picture’, I’m asked: ”make this part more dramatic, make that part more subtle” and so on. But there was no real locked picture on The First Film, re-writes were made to accommodate shifting scenes and added material. Nevertheless, it was great to have artistic liberty and to work on such a fascinating story. To top it off, this year it was recognised with a Media award for my work on it.” (Christopher Barnett was speaking with Markson Pianos Composer in Residence Lola Perrin)

The First Film is currently available on iTunes, Amazon, Vimeo and will be screened on Film Four/Channel 4. The DVD will be released in February 2017


The Modern British Slave Trade will be screened on Channel 4 during December 2016.
Posted by The View From Markson Pianos at 06:33 2 comments: