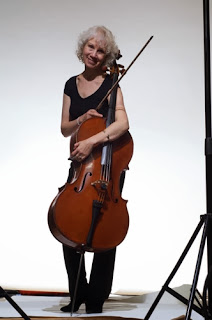 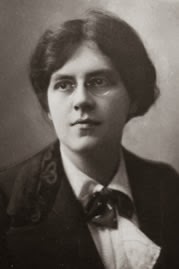 “Nadia Boulanger was born 1887 and lived to 1979 and was just a unique musical talent. She had a younger sister whom she revered. Nadia and Lili both studied composition and became composers, and they both tried to win the coveted Prix de Rome. Nadia became one of the few female winners of the 2nd Prix de Rome but her sister, at the age of 19, won the Premier Prix de Rome and as a result of that Nadia seemed to decide that she herself was not a composer. So she stopped composing and became primarily a teacher and also a performer of the organ and piano. It seemed almost as if she had a strange psychological block about herself and she just wanted to aid and abet other people's creativity.

Nadia had a way of nurturing. She had more than six hundred students and she had a huge interest in Americans and the situation in America where there hadn't been a traditional musical culture. Most musicians in America at that time had come from other places. She felt that the musical culture that evolved in America during her lifetime, and with her help, evolved from the music of African Americans.

She was not interested in imposing a stamp on the composers who studied with her. What she thought was the necessary thing was to learn how to listen and work out how to be able to recognise and write what a composer was hearing, so they absolutely understood music from the inside out, and then to evolve their own style. All her students have very individual, unique styles – including the really famous ones who include Copland, Barber, Bernstein, Carter – most well known American musicians went to Paris to study with her. She had a studio in the house she'd lived in since her teens and she had her Wednesday class there; it stayed like that for her whole life.

I've known about Nadia Boulanger since I was a little girl because my first teacher, Peggie Sampson, had studied with her (and also with Casals). Peggie was originally from Edinburgh, she died in the '90's. She was quite well known in Canada - where I'm from - because she was at the forefront of the Canadian Baroque movement playing viola da Gamba. In my lessons Peggie offered me a huge repertoire which she'd developed through her association with Boulanger; a lot of short pieces and show pieces of 20th Century music that were quite new then, not so quite well known now, including Hindemith who Boulanger rated highly. I also remember that Peggie was very familiar with Imogen Holst.

I was visiting my sister who runs a large music school in the States and saw on her desk a book that was transcript of “Mademoiselle” – a documentary about Boulanger I'd seen years before. I pounced on it saying “This is mine now!”. I realised it would be amazing to create a concert programme triggered by the transcript and that's exactly what I did. And that's why we have an actress working with us – to read from the book. I sourced various compositions; by Nadia, her sister Lili, her teacher Fauré and three of her students - Copland, Barber and Bernstein and also her good friend, Stravinsky. I am a composer too, so I composed for the project; the poet Paul Valéry was a close friend of Nadia's and I wanted to include him so I wrote a song setting his text.

It was easy to source Nadia's and Lili's works, they are in the general domain. We've been rehearsing at my place and spending hours on this project because we love playing together.

I've been working with the singer Sarah Cluderay for around six years; I love her voice...her ethereal voice. Our pianist is Selah Pérez-Villar from the Canary Islands who is a wonderful, passionate pianist. Our actress is Sally Mortemore; she was in Harry Potter and the Chamber of Secrets.

We are ending with an amazing tribute of Leonard Bernstein about his meeting with Nadia on her deathbed when she says she's hearing music without beginning and end, followed by a beautiful song by Barber which many people know - Sure on this Shining Night - which you could say is about healing, because even though we know Nadia is gone, she still exists for us in our minds.” (Mayda Narvey)

Mayda Narvey was born in Canada where she was taught by Peggie Sampson, a student of both Pablo Casals and Nadia Boulanger. Narvey went on to study with Tsuyoshi Tsutsumi and Janos Starker, and was teaching assistant to Bernard Greenhouse of the Beaux Arts Trio at the University of New York where she received a Master of Music degree. Having played for some years with the National Arts Centre Orchestra of Canada, performing often in a solo and chamber capacity for the CBC (national radio) she moved to London where she teaches cello, string quartets and some music history classes at the City Lit and in the City. She writes/arranges for and plays with the Ismena Collective who perform 'Sunday Cabaret' in the West End and performs solo and chamber music recitals both in venues across London and beyond. She also runs a recital series at St Philip's in Earl's Court. Her piece 'Traue' for small ensemble and vocalists was recently performed by the Sweelinck Ensemble in the City of London and her chamber opera, Antigone is to be workshopped in the spring. Narvey is the cellist on Coloured Clutter by the young British band, the Savage Nomads, who have been called the “saviours of contemporary music.”

Posted by The View From Markson Pianos at 06:13 1 comment: