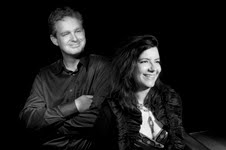 "PA We've been together artistically as a piano duo, and as a couple, for almost twenty years. We met very young, at the studio of our piano teacher. We spend time alone on our parts – sorting out technical details individually, so when we rehearse together it's always about such aspects of the ensemble as phrasing, pedalling, balance. Sometimes we have a dispute, which turns out to be fruitful as we arrive at even more interesting conclusions; sometimes we may feel very strongly about our individual approaches to music, but we have learnt to still talk to each other afterwards - just joking!

NT It's fun and also intense. What happens many times is that by the time of the concert, the sound is “as one”: I remember times not knowing where the sound is coming from...transcending the individual contribution.

PA I agree with that.

NT It's such a creative process, from working on the technical aspects, the nuts and bolts of the performance, to actually performing, which is when you can really get swept up by the music. I remember once, during a concert at the Jaqueline Du Pre Music Building in Oxford: I looked down at our four hands while playing and I didn't know where the sound was coming from.

PA We've found that in the UK there's not an abundance of concert halls which provide two grand pianos. We adjusted to four-hand piano duets. They are very different types, although we love both.

NT I love the proximity of the piano four-hands, although technically such repertoire can be very challenging. Hands very often interlock or even cross. Further adjustments need to be made as we are of differing heights too. But obviously in piano four-hands, we can breathe and phrase as one. In two-piano repertoire, the sound becomes naturally more orchestral and we can explore the medium as a conversation between two individuals, as much as uniting in harmony. It really depends on the work. I remember one of the first times we were performing as a duet: we were backstage waiting to go on stage to perform Brahms Hungarian Dances (complete 1st volume!), Schubert Fantasie in F Minor, and Liszt Grand Galop Chromatique, we were very charged up, it was a manic programme.

PA I was jogging on the spot and Natalie was doing small jumps. We started joking a little and she began to give me small boxing punches in my stomach, we were doing all these manoeuvres and suddenly our mutual piano professor walked in on us. It was really funny. We've calmed down a lot since those early days in Athens.

NT For me, at the beginning it was rather nerve wracking to depend on somebody else for tempi, especially as Panayotis loved to take break-neck speeds and I always rather preferred to play with the colours. I think, through the medium of chamber music, we have helped each other grow further as performers and stretch beyond our comfort zones. Nowadays, we are able to be spontaneous and creative on stage, because we have such understanding of each others’ intentions.

PA We also try to swap who has Primo and who has Secondo. It makes it interesting visually also for the audience. When I'm making an arrangement, I'll tailor the parts specifically for each of us, although in the end we tend to just choose what we like best. We are also soloists, but the experience of playing four hands is something we really value and love, because it's not easy for pianists to find situations in which to collaborate.

NT These days we tend to appear solo if a composer approaches us with a specific work. For example, last September I was invited to play the Thaelmann Variations at Glasgow City Halls as part of a conference on Cornelius Cardew. But I must say it pleases us that more and more composers, such as yourself (!), approach us with works for piano duet/two pianos. And I think, what makes us different from other piano duets, is our love for the new and exciting. We agree with Nicola Benedetti who just got an album out playing John Williams and doesn’t consider it a cross over. We have the same idea, that labels should not stop us from engaging us (and our audience) with good music, be it new, or old and revered.

PA Yes, we are very eclectic in our choice of repertoire and we are also careful not to alienate audiences. Among our many loves, we programme from film music, music that has specific colour such as from Greece and the Balkans, and repertoire from early 20th c. onwards, including classics such as Shostakovich, Ravel, to newly composed works, alongside established classical repertoire. We actually just finished presenting all of the Mozart Sonatas for piano four-hands and for two pianos in our various concerts, alongside our film music arrangements." (Panayotis Archontides & Natalie Tsaldarakis)

Panayotis Archontides is a Greek-Australian with British roots and Natalie Tsaldarakis is Greek with Italian roots. They live in London with their daughter.

They will be performing four hand works next at St Alfege’s Church, Church Street, London, SE10 9BJ on October 20, 2012 at 6pm. Works by film music composers Williams, North, Rozsa and Lola Perrin’s Before Sleep in world premiere. Tickets on the door.

Their CD (included in the Athens Concert Halls’ Library in the Tamvakos Archive) can be purchased from http://www.cdbaby.com/cd/ivoryduo
Posted by The View From Markson Pianos at 14:14