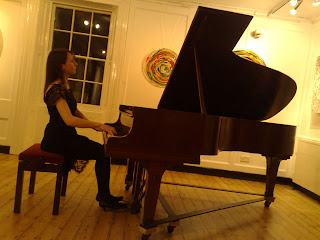 “I perform some difficult  Nineteenth Century music.  When I’m learning it I find you have to have a lot of perseverance, you have to really tackle the notes,  get to know the notes, get the music really inside of you, get it completely memorised, and then I find, especially with more difficult works, it’s best to learn the notes and then put it aside if time allows you and let the music settle within you. If the music is really difficult it can take so many hours of practice that you don’t ever want it to get stale, or you don’t ever want to find you are getting sick of the impossible bits that you are practising over and over again, so putting it aside for a while is a good idea.  Then I do the obvious things, I listen to lots of recordings and decide what I want to do with the piece.  There’s a lot that the composer gives you in the score,  but there’s so much that they don’t at all.  Say, for instance, in the Schumann Fantasie, especially in the first movement, there is a lot of rubato, but it’s also very episodic, so the tempo does change throughout the movement and you really have to get a sense of unity but also have that freedom.  You have to interpret the music, and feel the different moods and characters and make your own decisions. Once you have memorised it I think it’s important to keep coming back to the score so you’re really aware of what the composer has given you to work with so you don’t just go off into your own world with the piece.  It’s a bit of a rollercoaster of emotions, you initially adore the piece and then you might go through down phases when you’re going a bit crazy, maybe there are bits just aren’t working how you want them to.  Especially with difficult music you hit these breakthrough points when suddenly it feels like you are finding your way and it’s really coming together as a piece.  I love performing concerts, and I’ve also recently realised that my dream is evolving because  I also love all the outreach work that’s going on, where you bring music to audiences  or venues that don’t normally get to have Classical music.  I particularly like to bring the music to children, and I sometimes find that kind of situation more rewarding than giving a traditional concert.” (Tara Clifford)

Connect with Tara at http://www.taraclifford.com/
Posted by The View From Markson Pianos at 04:05